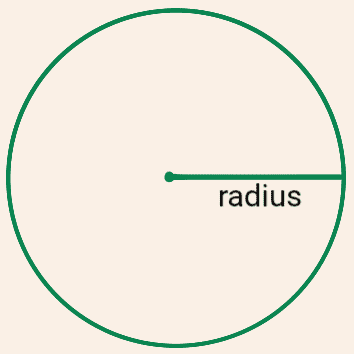 A circle is one of its kind among all the geometrical shapes; it is the only shape where all points are equidistant from a given point called the Center. Thus a circle is formally defined as:

A circle is a closed plane consisting of all points which are equidistant from a fixed point called as Center. Note that, a circle:

The radius of a circle is generally represented by the letter ‘r’.

A circle refers to only the outer boundary whereas a disc refers to the whole shape including the inside part.

Since the circle is curved and doesn’t contain any line segments surfaces, it doesn’t come under the family of the polygon

With CalculatorHut’s circle area calculator, you can easily calculate the following parameters of a circle:

Diameter is a line segment whose endpoints lie on the circle and which passes through the center of the circle.

A diameter is the largest distance between any two points on the circle.

A diameter, represented by ‘D’, is equal to twice the radius of a circle.

It is the total length of the circle, when you put cut it at a point, and put in the form of a straight line.

The circumference is represented by ‘C’.

It is easier to square the circle than to get around a mathematician. – Augustus de Morgan, Indian Mathematician

Fascinating Facts About a Circle

How to use CalculatorHut’s Circle Area Calculator?

To avoid all this, it is better to go with this Circle Area Calculator as one we get accurate results in seconds. Even by adjusting the units of the circle you can perform in different units and get whatever result you need. This not only saves your time but also helps you to complete your task with greater accuracy.

Life is one circle. The end of one journey is the beginning of the next. – Joseph M Marshall