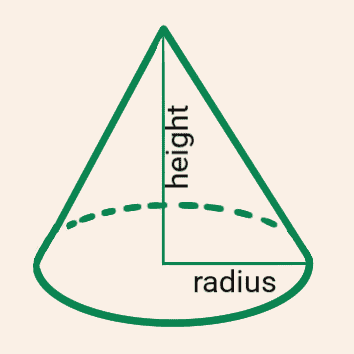 A cone is a three-dimensional geometric shape that diminishes smoothly from a flat base to a point called the vertex. Cone is anything with a circular surface on one end and one point at the other end where all sides or lines meet.

Mathematics is the cheapest science. Unlike physics or chemistry, it does not require any expensive equipment. All one needs for mathematics is a pencil and paper. – George Polya

Major calcuations found in the cone


Height is the length of the perpendicular drawn from the apex to the base represented by ‘h’.

The radius of flat base

It is the radius of the circular base represented by ‘r’.


The height of the cone from the apex to the point lying on the circumference of the base. It is usually denoted by “l” or “s”.


The lateral surface area of a cone is the area of the lateral or side surface only.

Why should you prefer CalculatorHut’s cone calculator?

Some necessary calculations like addition, subtraction, etc. can be done without using a calculator. But when it comes to finding the volume, lateral area, base area, and other important calculations, it takes up a lot of time to calculate since the complexity of the calculation is increased.

So, to make better use of your valuable time, you always need to think smart and make the problem much easier. It only happens when you do your calculations using this cone calculator. This saves lots of your time and helps in finishing your calculations much faster.

How to use the Cone Calculator?

This is one of easiest application that can be used because to calculate the parameters of the cone all you need is the radius and the height of the cone.

Once the radius and height of the cone are entered, you need to set the units in which the answer must be in and click on calculate. You will get the accurate results in less than a second. Clear can be used if you have entered the wrong values and if you need to change them. This is how you calculate the parameters of the cone using CalculatorHut’s cone calculator.

Math may not teach us how to add love or Subtract hate, but it gives us hope that every problem has a solution.