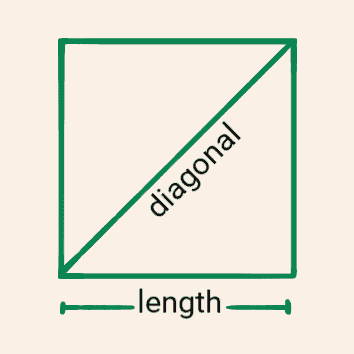 Square is a quadrilateral whose all sides are of equal length and all the corner angles are equal.

A square is also called as a regular quadrilateral because of the equal sides and equal angles.

Properties of a Square:

What makes a quadrilateral into square?

The area of a square is the product of length any two sides.

How to use Calculator Hut’s Square Area Calculator?

Square calculator allows you to find the area, perimeter and length of the diagonal of a square in the units you want. Since it is very difficult to calculate these values if the length of the square is high, this calculator helps us finding these parameters in no time.

You can also conveniently add our square area calculator widget to your website and make calculations instantly.

Just let us know your preferred customizations at calculatorhut@gmail.com and we would design an attractive and colourful widget as per your taste. And this is all for FREE!!

Success doesn’t count unless you earn it fair and square.