Friction is a force that resists the relative movement between two surfaces. The surfaces can be any type – solid-solid, liquid-solid, solid-gas, gas-gas, liquid-liquid, etc.

Friction is a component that assumes importance in various studies as well as many aspects of daily life. Hence, the knowledge of friction calculation is necessary for everyone.

Consider the example shown below.

A boy tries to push a wooden block against the floor from rest. 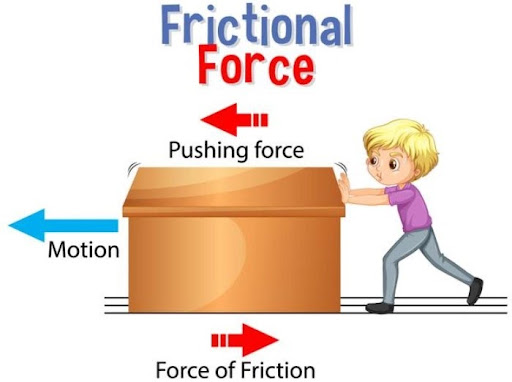 Then, the force of friction that exists between the floor molecules and the wooden block molecules prevents the boy’s effort of pushing. Thus, friction always acts in the opposite direction of the push.

According to the renowned French Scientist Charles-Augustin de Coulomb, known for Coulomb's law, friction depends on:

The classification of friction depends on the context of the study.

Friction classification based on the nature of surfaces:

It is the frictional force that comes into the picture when two dry surfaces try to slide over each other. Accordingly, there are two types of dry friction:

Frictional force that exists between two surfaces in motion.

Dry friction is mainly due to the unevenness of surfaces despite the smoothness they appear to be.

It is the frictional force that exists between the layers of a viscous fluid.

When two surfaces have a lubricant in between them, lubricated friction comes into play.

When fluid tries to slide over the surface of a body, skin friction plays its role.

When you try to deform a solid substance, the internal friction opposes the motion between the elements that make up the solid.

Friction classification based on the other factors:

The amount of friction that comes into the picture as a retarding force when we slow down a moving vehicle or a machine is called braking friction.

Before proceeding with the static friction and kinetic friction calculations, we should understand an important term: Coefficient of friction.

What is the coefficient of friction?

The coefficient of friction denoted by the Greek letter μ is the ratio of frictional force and the normal force acting on two surfaces.

Thus, the coefficient of friction is calculated as μ= Force of friction/ Normal Force 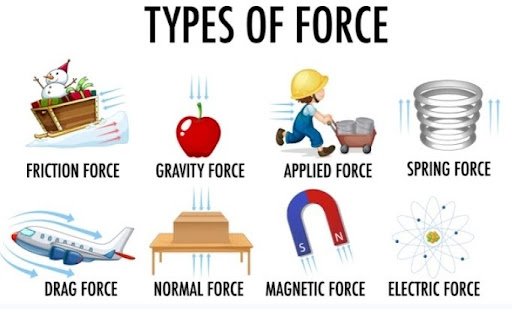 Walking: We cannot walk if there is no friction. Friction between the ground and our feet helps us in walking, standing, and moving.

Tire design: Ever wondered why tires have treads and are not smooth? The treads on the tires help to increase friction when the ground is wet and aids in safe driving.

Matchsticks: The basic principle of generating fire by rubbing stones has friction hidden in it. Friction between two dissimilar substances is also the scientific principle behind the design of matchsticks.

Aircraft flying: It is a common experience that flights are delayed or canceled when the weather is cloudy or not suitable. It is because these clouds in such unsuitable weather can create static friction around the airplane, thus interfering with flight communication.

Industrial applications: Friction, if not taken care of, can cause industrial hazards ranging from fire to other accidents. Industries and heavy machinery hence use lubricants and insulation coatings etc. to prevent such hazards due to friction.

Forest fires: In extreme summers, the friction between branches of trees can lead to forest fires.

Sports: Sliding activities in water parks consider fluid friction in their design. Similarly, the cyclists' helmets are so designed that the air passing over their heads limits friction and helps their cycling.

Leonardo da Vinci was the first person to study friction. Though his findings never came out immediately, it was his work on the history of tribology that proves that da Vinci systematically studied friction, first in the world.

How would the world be if there were no friction?

If there were no friction, you would miss many things including walking, writing, and driving.

Friction is not always bad. It helps in many daily activities and is an essential force for the existence of human life. However, it is important to limit friction to healthy levels through various measures for safety, productivity and economy.

How to reduce friction?

You can reduce friction by using lubricants, polishing surfaces, and some special industrial practices.

Is friction a fundamental force?

Friction arises due to the property of surfaces. However, it is not a fundamental force. It is the unevenness of surfaces that results in friction.

What are the units of friction?

Friction is a force. Hence its unit is Newtons (N). Note that the coefficient of friction(mu) is dimensionless and has no units.

What is the study of friction called?

Tribology is the study of bodies in relative motion. Since friction comes into the picture when two bodies stay at rest or in motion, the study of friction falls under Tribology.

We are sure after reading the fascinating facts about friction on our friction calculator page, you are clear that friction is both useful and annoying. It all depends on how we use it. After all, is that not what science is about?

Happy calculating with our wide range of scientific calculators. If you need this friction calculator as a widget, drop us an email at calcualtorhut@gmail.com to get it free!!